Show off your squad's achievements
10 posts • Page 1 of 1

Okay, we've moved from Windows a few weeks ago and had to start over (well, with Disney's supplemental crystal packs we had quite a headstart here). Now we've been kicking asses in wars for a whole month straight and I think it's time to brag 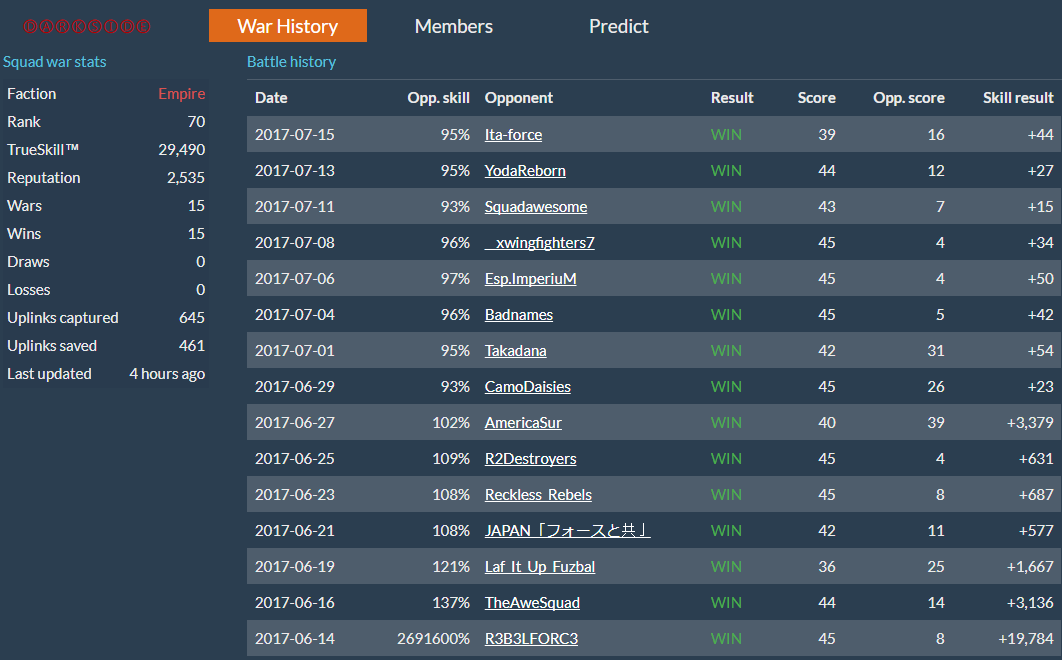 COME TO THE DARKSIDE

Cool good job, try to make it to 100-0
Squad: TeamGibson
In-game Commander Name: FuzzyBunnies (previously FkOff but Disney had a change of heart on that one)

I wish that dogegriff dude was around to contribute to this thread...

Sigma582 wrote:Okay, we've moved from Windows a few weeks ago and had to start over (well, with Disney's supplemental crystal packs we had quite a headstart here). Now we've been kicking asses in wars for a whole month straight and I think it's time to brag

COME TO THE DARKSIDE

The funniest thing about this particular signature is that by the time you realize it doesn't say anything it's to late to stop reading it.

Americasur is an ex-windows squad, isn't it? They're the only ones that gave you a fight. We've found that the android squads we draw are pretty terrible. On paper, they are better than us, and the match maker predicts them winning, but in reality, they have no clue. We've had many wars where the other side never attacks outposts, or if they do, they take back Hoth when they're down 45-2 instead of Takodano. Or, we run into squads where their top player, a level 10, hasn't modified his war base in a year, so it doesn't have dekas, or is missing a shield or other new buildings that his regular base has. We've seen this at least twice. Anyway, I used to be intimidated by sterling war records, but after doing this for over a month, I no longer am. There is some seriously weak competition out there.

yeah, indeed. i'm sure there are strong squads out there but most we draw are useless.
in fact most of them have more victories than losses in their history, so you would expect some action, but when it comes to fight they turn out pretty lame.
one explanation i can think of is that they get discouraged by initial ambush. when you are losing 2:40 after 30 minutes in battle it takes a lot of guts to pull the team together and fight back.

RealDarth wrote:I wish that dogegriff dude was around to contribute to this thread...

I am surprised he disappeared.

I actually keep an eye on them and I see one of the glaring issues with SOD.

One of the big things here is the constant tweaking. Darkside is gaining from the MASSIVE up front points that the system offers now that it is older and "has more information" ... WAR247 didn't get those same points up front and bad luck has more or less kept them from gaining them.

I mean ... they are a "game the system" type squad with a bunch of small bases and only a couple of 10s, but there are plenty of those in the top 100.

Always fun to look at weird little things like this.
Leader of The Mob Syndicate

I bet he was banned, he was a dick, but he was a hilarious dick. We miss you bra. Sorry squad WAR247 is not that good anymore.

Doge raged like a mofo and kicked everyone but the bases he controls after the last war/win. He was going to be late so planned to coordinate an hour after the start, but two regulars ignored it and kept retaking tako. The rage-fest resulted in him kicking all of the regulars and the zombies timed-out after 30-days. The tako thing was pretty stupid. The other team didn't use jumps and we weren't around to fight. lol the wasted attacks on tako was the last straw. Our top two are maxed out on all frag items; tie-adv, mtv, shocks, kessen, etc.

Our last max base was kicked after our last tie. He was on tako duty, but let them have it all night. One tako retake would've left them without the ability to hold tako for an attack on our top two, so we tied. Another rage-fest ensued. That guy is now on FirstEmpireElite.

The top five remaining are all maxed on frags. We started to lose interest when we got max tie-advanced, Kessen, etc.

Ahh well, we had a good run. Yeah, we fought with up to six level 3s, but they changed the matchmaking algorithm making it impossible to get a match when playing more than three 3s. We have to play all of our 5s and 6s in the bottom two rows. Every team we fought had at least a 20-hq level advantage... 5-15K advantage in cumulative base strength.

Users browsing this forum: No registered users and 1 guest