Currently only use the Spider Bots for HD if I am getting close to 30% damage. Haven't tried in PvP yet, might have to look at the options.
Windows refugee with the Rogue Ewok group. Killing the Empire since 2015.
Come and visit us at RogueEwokReturn

⇨ IMPORTANT: Currently no stats on what the Increased Values for Health and Damage are but as soon as I know I will post here in this Topic.

The last few units that they've given 'big increases' in damage and health have been bumped up by about 20%. It hasn't made much of a difference. Until they switch the primary target of the spider hero from turrets to something reasonable, it is going to suck hard.

Boog wrote:Until they switch the primary target of the spider hero from turrets to something reasonable, it is going to suck hard.

Currently these Probe Killers "Baby Spiders" often never reach their Target due to their slow speed which causes them to follow behind the "Mamma Spider". This is most noted in HD Events where the Spider Hero currently is best used.

Jesus, who needs to maxed out the hero spider? If they are going to buff that thing in 1000% maybe it become useful...

But I love the Undead... They always give me some nostalgia. I started my Rebel base on iOS/Android on August 2016, and I was abble to earn the original Scoot Undead Troopers. We didn't see this unit last year, we won't see them again this year... Why?

It's a shame. I don't have the Undead Scout Troopers in my Imperial HQ because I started this base after the Windows closing annoucement, on June 2017.

The Undead Troopers as their samples are in my Rebel HQ: 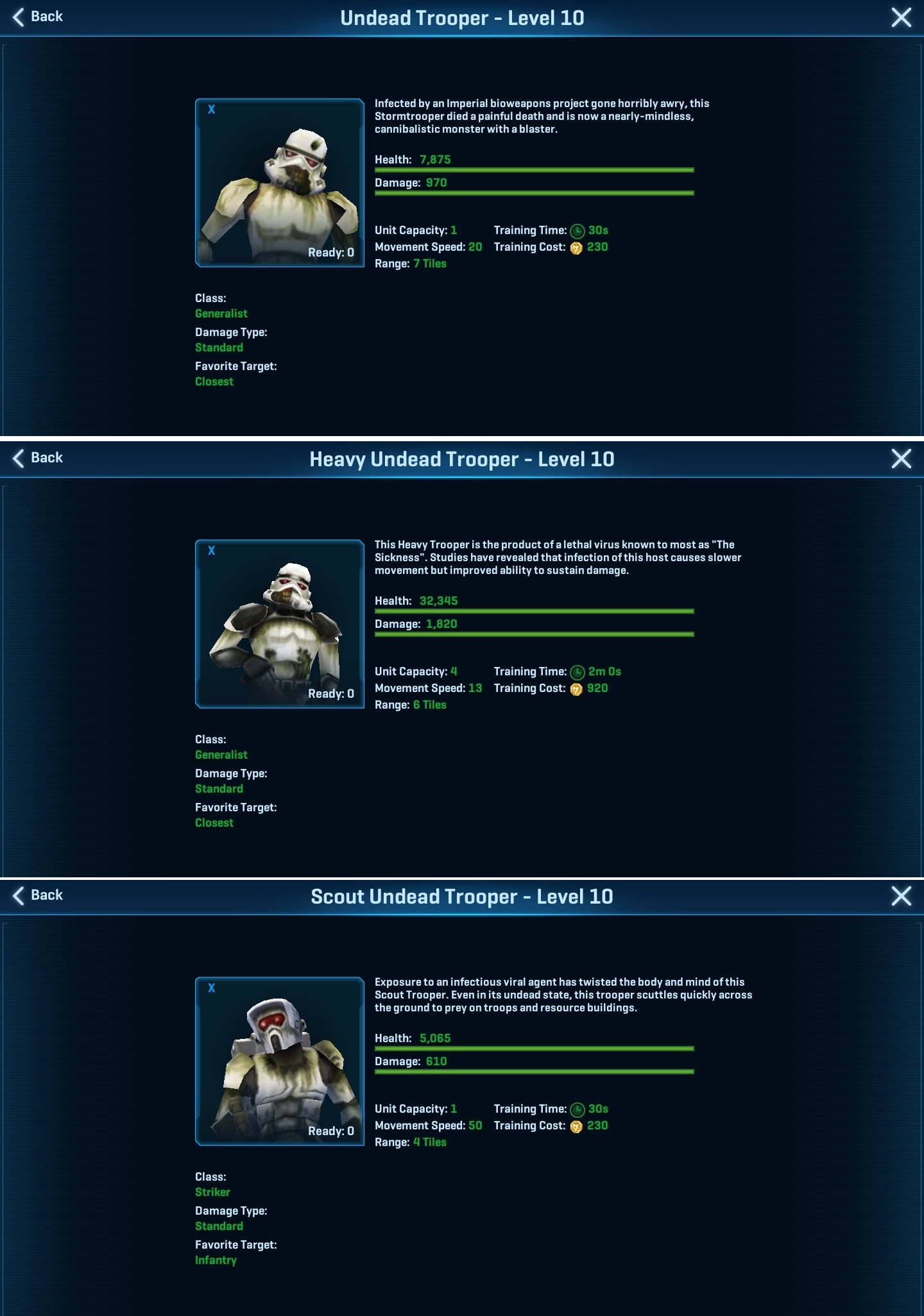 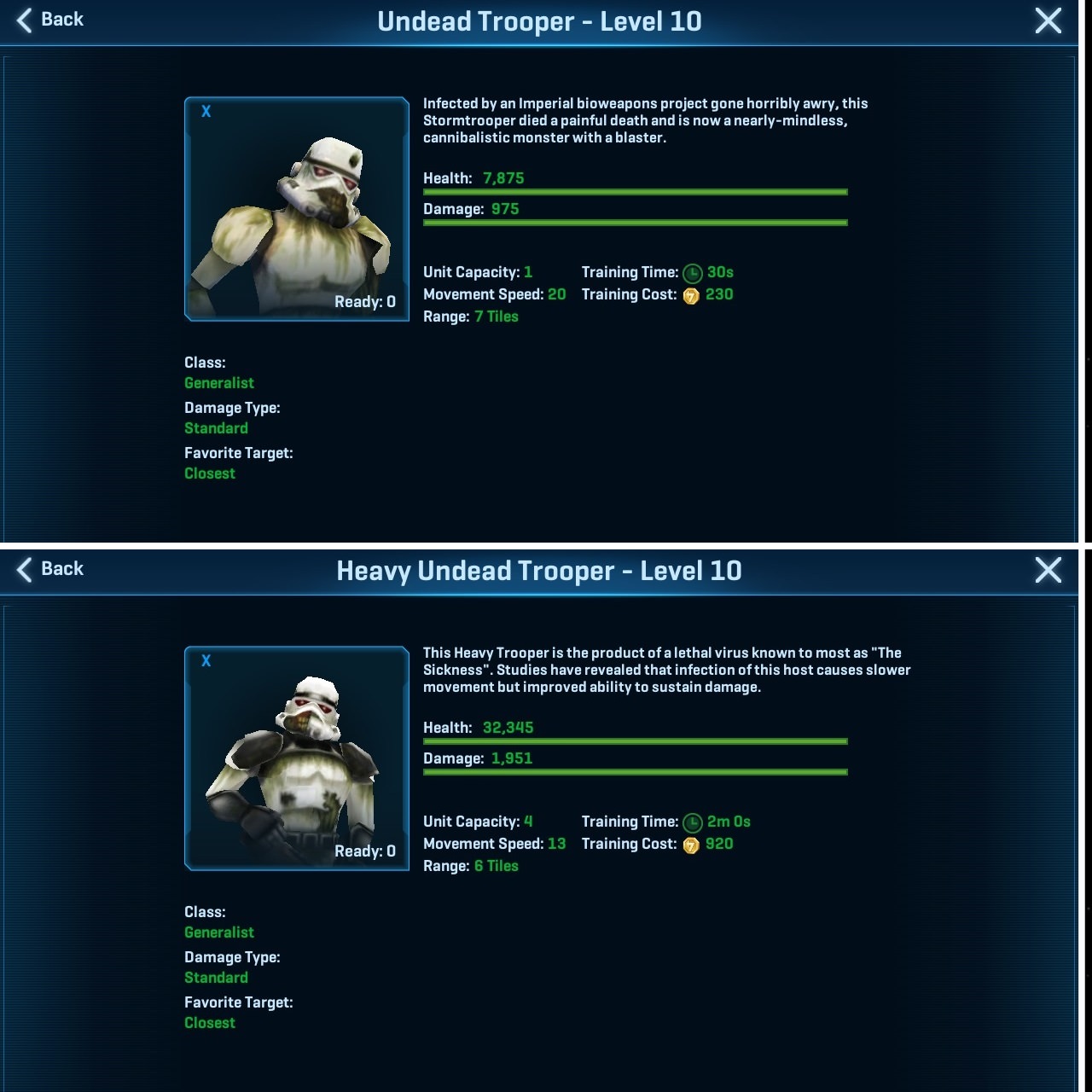 Maybe this stats change now as we have a new Level.
SWC Windows survivor.

Events to replenish novelty units such as Undead, Droideka, Exotic Creature, and Stolen should be more abundant.

I believe many players enjoy using HQ loadouts at their leisure to experiment, do a squad challenge, or simply have fun. The occasional pure undead or all mercenary loadout can be the difference between boredom and engagement. These units allow players to branch out from the mundane loadouts needed to efficiently 3-Star bases and add variety (particularly when developer bases pose little challenge).

Unfortunately players tend to hold off on spending the units as they always want to keep 1 or 2 saved in their HQ and the events to replenish them are limited.

Many mobile games offer scheduled events such as a “no resource cost for doing X every 1st Saturday of the month” or a “spend Y resource and get Z reward Thursday”.

Examples of this for SWC could be:

(2) One or two week long events that give a conflict equivalent tiered reward, where the objective is to “do X” such as “deploy 10,000 troops” or “destroy 500 bases” or “loot 500,000k total resources” and the progress is monitored over the two weeks with rewards given at certain checkpoints (every 500 troops deployed), building up to the final reward (conflict crate). This differs from the EP system which requires research wait times.

(3) A more relevant daily reward system such as a “Star Wars casino theme” where you get a daily spin or roll for a variety of low to high quality items (ranging from samples to crystals to elite fragments).

(4) scheduled monthly incentives such as “1/2 off research cost 1st Sunday of the month” or “1/2 reduced upgrade/build time the second week of every month”. Such events would make commanders prepare for these events ahead of time to make good use of their powerful bonuses.

Nonetheless, all this came from the talk about upcoming Undead content. More events surrounding replenishing such units would be well-received by SWC players.
Rath Severus
Leader of PartylikeVader

Buff to the spider isn't unwelcome but like Boog said, how about making it not target turrets? Making the spiderlings faster is a good idea too. I still think it'd be better as a striker, although obviously of limited utility compared to other heroes. Would be neat to set it loose on the hordes of GR sometimes though.

Bummed about another year with no undead scouts, 'cause they were my favourite of the three types. For a while they were a part of my standard load-out; 1 undead scout for tripping buried dekas/SCs.

Maybe one day they'll do an experimental laboratory structure and allow us to just train our own zombies or something. And undoubtedly make them frag-based so they take for-effing-ever to upgrade. Oy.
Sith-Society
Mature HQ10. Immature meat-bag.
The wall bug giveth, and the wall bug taketh away

This sentence sounds like it was copied out of the Enhanced ST / ITT event:
"New rewards will not be available in Commander Events until Fall. Unlock and upgrade now to enjoy exclusive use until they return."
Doesn't sound relevant to the undead conflict.
SWC account:Bacon
Squad:CircleOf.Masters
LINE ID: sgu97cab

***CircleOf. group of squads are recruiting players of all abilities. If you are currently without a squad or in between squads please PM me on this forum or on LINE app***

Of all the possible 'balance' updates, why spider droids?

The balance issue that most needs addressing is the one where the Empire Faction gets to use the rodian skin for its sniper GR (which targets infantry inc jets) whereas the 'equivalent' Rebel Faction GR - vanguards has no skin and isn't even a unit that attacks infantry, which in an era where both sides are using almost exclusively jets/jumps (ie flying infantry) is an indefensible faction imbalance.

Whether or not the gameplay balances out as a whole, this is not justice being seen to be done.

And, no, no, no I don't want to re-ignite the faction balance debate on this issue. Any readers that do wish to re-visit all of those arguments, please do so in another thread.

Faction imbalances, perceived or otherwise, create hostility in the customer base, and make sharing and enjoying the game on forums like this (or the old official one) an unpleasant experience. They are bad for business. They are bad for the game's growth.
HQ Prestige - Sons of Death & Midnight Mob

You must do what you think is right, of course.