Bartor wrote:Had a response back from Disney. No surprise, they blame it on errors in the results screen.

Why don't they log the number of complaints they receive about a squad and then kick them out.

if the error is a lack of sc or droidekas that wipes out troops at the start that would be a huge difference.

In the battle in question, my SC wasnt tripped, nor was the DEKA and the attacker didnt deploy his sc or deka either. But even if he had he still wouldnt have got 100%, because when all his troops had died, i still had all my shields and turrets active. As I said, he was 2 levels below me and wasn't using any skins.

I suppose I'll have to put up with it. Disney wont do anything. I just hope i dont meet him too often, or anyone else form his squad.

The game is hacked and there are many squadrons that cheat, as well as players who have reached their maximum level very fast, win wars cheating and in normal battles despite losing, they take away resources. Even yesterday there were TAKO and DANDO with us, suddenly they got them without any action and when we tried to attack their bases, we didnt have the power of TAKO and DANDO. they got 45 and we could got 45, but they cheated I dont know how, despite about that we got 41 with our effort. Clear example: Deutsch_Imperium squad, many players at the highest level and recently joined the squad. And there are thousands of people who cheat, I have received complaints from my colleagues and even friends from other friendly squads. There are many people who have been playing for more than 3 years and even spending money on the game. It is not fair that the game has these problems. Disney must Eliminate these cheaters players along with their squads and try to block hackers programs.

Sometimes you just get beat, that does not sound remotely like cheating. People move in and out off squads all the time.

No friend, you're wrong. I have no problem losing, in fact, only very strong squads have defeated us. The issue is losing well and without cheating, where the planets disappear, where the power of the planets do not have them, that's what I mean. I know that many players can move but, but how sure that some lvls10 are authentic?. Only Disney should know with their records. I invite you to go to Tatooine and look at levels 10 to maximum power, and see how they start to steal without winning. For me and many people that is cheat (hackers).

I sincerely doubt I'm wrong. This game is buggy as hell. Always assume a bug before you accuse an entire squad of cheating. There are threads open right now discussing this issue. The game has huge lag when it comes to chat and outpost notifications. That is all you experienced.

Thanks for your comments but this is not the case that you believe. I never write in these places but this already seemed too much injustice, but easy, I already put my complaint and I hope that DISNEY investigates those levels 10 with everything to the maximum including the droidekas.

Pablini wrote:Thanks for your comments but this is not the case that you believe. I never write in these places but this already seemed too much injustice, but easy, I already put my complaint and I hope that DISNEY investigates those levels 10 with everything to the maximum including the droidekas.

What made you think Deutsch_Imperium isn’t a good squad that they needed to cheat to beat you ?

I faced them before, long time ago. Top notch (but I hated them, lol).

Since the patch, sometimes the notifications that the outposts are under attack do not show. Doesn't have anything to do with cheating.
Marauders-Delta

Some players also don't realize that if you load a base while you're squad is attacking the outposts (or before), you will see the notification that the OP has been captured, but the base you loaded will not have the OP's on your side. Every time you attack, you have to look and make sure the OP's you think you have are on your side.

Bartor wrote:Had a response back from Disney. No surprise, they blame it on errors in the results screen.

Why don't they log the number of complaints they receive about a squad and then kick them out. 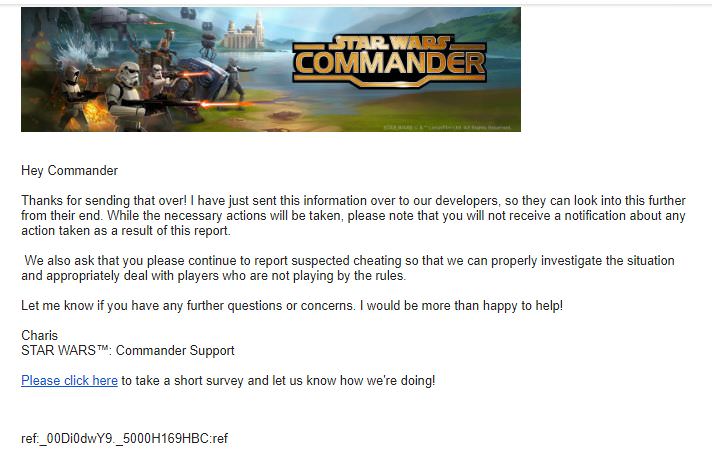 That's because I sent them the video-capture of the replay and they (SWC Support) can see the suspicious attack on my base.